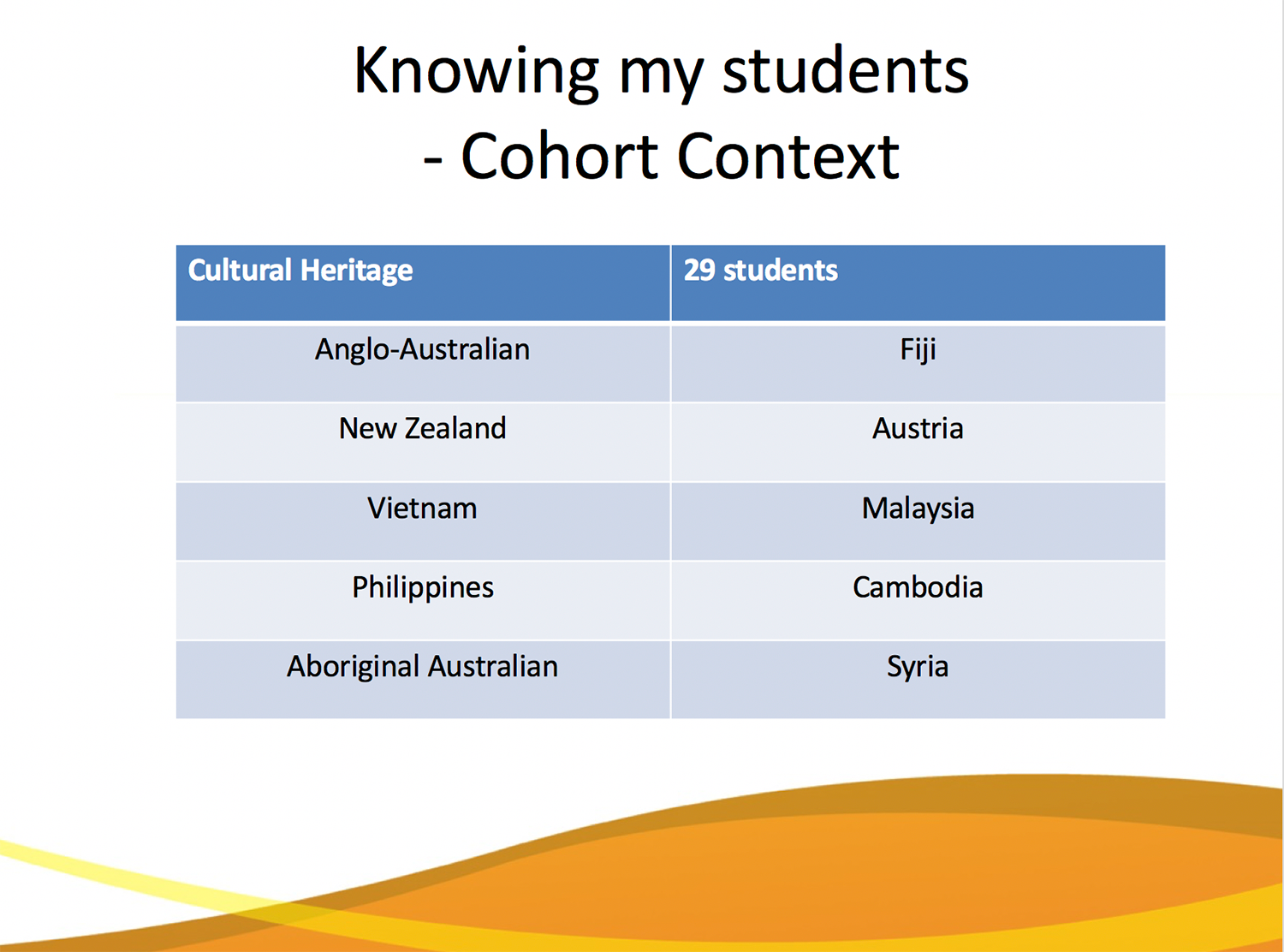 This extract from the website of the Federal Department of Immigration and Border Protection typifies a powerful and commonly accepted narrative about cultural diversity that circulates in the Australian public space.

Since the department [of Immigration] was established on 13 July 1945, seven million people have been granted a visa for permanent migration. As a result, Australia is among the world’s most culturally diverse nations. About 45 per cent of all Australians were born overseas, or have at least one parent who was born overseas. Australia has derived substantial economic benefits from the skilled migration and temporary entry programs during the past 65 years. Skilled migrants are filling positions that remain in chronic shortage despite the effects of the global economic crisis. International students and visitors to Australia contribute to our foreign exchange revenue. Social benefits have been reaped through the high levels of community harmony and cohesion which draw Australia’s diverse society together—Australians are regarded internationally as a friendly, respectful and welcoming people. (Department of Immigration and Border Protection, 2014)

In brief, this narrative asserts that we are an increasingly culturally diverse country, there is good evidence that cultural diversity does contribute significantly to our economy and society, and we make claims about high levels of community harmony and cohesion. Put simply, Australia can be considered a hopeful global exemplar for building an economically successful and socially cohesive nation that is culturally diverse.

But then globally, nations such as Australia are contending with serious tensions related to increasing cultural diversity. Put simply, all nations now struggle with ‘ungovernability’[2] pressures from within and outside of the nation. Inside of the nation, traditional sites for sociality and community are breaking down, such as family, church, and local community as understood in the famous book, Community and Society, by Tönnies as the ‘little community’ characterised in terms of ‘an understanding shared by all its members’[3] and this is not a consensus, but an ‘understanding that does not need to be sought let alone laboriously built or fought for’ (p. 10). Such breakdown of traditional sites of community, Bauman argues is significant because it intensifies a key malaise of our times: that we need both freedom and security, but freedom and security are ‘simultaneously, complementary and incompatible’, and hence ‘equally indispensable’ yet ‘hard to reconcile without friction’.[4] These ungovernability pressures have forced nations to off-load demands onto the market, increase steering capacity through expanding horizons for conceptualizing and acting, and specifically for this proposal, nations have intensified their border work, for example, increased attention to border protection and tightly framing legal citizenship.

We might be rightly proud of multicultural Australia, but then cultural diversity is still highly contested on the street, in the workplace, and in media culture. And cultural diversity is one of the divisive sites in Australian politics. On the street, we can remember the Cronulla riots,[5] an outbreak of violence against Indian students in 2009,[6] racist taunts on public transport that go viral on social media, and the daily experiences of racist hate speech that many non-Anglo Australians experience.[7] In the workplace, there are policies for skilled migration, yet heightened concern that ‘they are stealing our jobs’. In the media, there is a cultural war being played around a politics of representation and examples include: the stolen generations being represented as myth,[8] and contesting how recent migrant groups such as Sudanese refugees get represented.[9] And in politics in Australia in the last decade or so, we have witnessed the rise and fall of Pauline Hanson, the Tampa Affair, and the development of ‘dog whistle politics’[10] around issues connected to ethnic and racial difference. But then as Noble[11] rightly argues, too much theory, policy and practice in this area:

Our brief analysis of the challenges of cultural diversity for Australia into the future, mean that ‘schools are currently sandwiched between demands of the economy on one side and increasingly fundamentalist communities on the other’.[15] Importantly though schools are both affected by these pressures, but also provides spaces for skilful intervention. We could research the effects of increasing cultural diversity on the school but we prefer to focus instead on how schools teach for cultural diversity. Schooling is a key site of identity and social formation in the Australian nation and hence potentially can play a significant role in developing the ‘high levels of community harmony and cohesion which draw Australia’s diverse society together’ and ensure continued economic and social benefits for the nation.

As noted above, our second rationale was informed by an alternative and parallel set of reasonings, which were made existential as the project got started. Put simply, we identified schools who had a reputation for advancing strong Indigenous education agenda. But when we started to talk to the participating teachers, it was clear that their classrooms, not only included a few Indigenous students, but often were also very culturally and linguistically diverse. Many of the schools we work in have students from forty or more nationalities attending. ‘Cultural diversity quite literally walks into the classroom’.[16] In which case, the sorts of pedagogies we are working on—enacting a local interpretation of culturally responsive pedagogies—not only has to work for the Indigenous students, but also cater for the super-diversity emerging in Australian school classrooms. In parallel then, a second rationale justifies CRP in response to increasing cultural and linguistic diversity of Australian society and the reality of superdiversity of the student cohort in public school classrooms. And whilst it is possible to argue that Australia should be considered as a hopeful global example for building an economically successful and socially cohesive nation that is culturally diverse, we are dealing with significant tensions related to increasing cultural diversity.

[2] Offe, C. (1987) Ungovernability: On the renaissance of conservative theories of crisis. In J. Habermas (Ed.) Observation of the “spiritual situation of the age”. Cambridge, MA.: MIT Press.