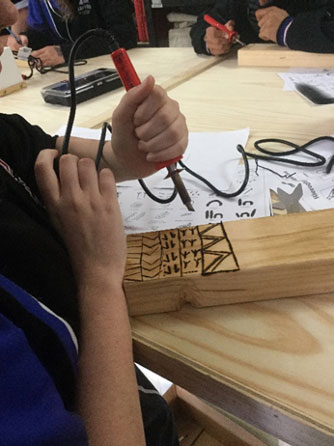 Naomi trained as a science teacher and has been teaching at Paperbark Secondary for several years. After working as an Aboriginal Education Teacher (AET), she has taken on leadership responsibilities and is currently the school’s Director of Aboriginal and Torres Strait Islander Education. Naomi’s father is Aboriginal, and in recent years she has increasingly identified as Aboriginal herself, so she describes herself as having a strong vested interest in Aboriginal education.

Paperbark Secondary has an enrolment of more than 1000 students who come from a wide range of cultural backgrounds and nationalities. Seven percent of students are from non-English speaking backgrounds and 15 percent are of Aboriginal and/or Torres Strait  Islander heritage. Paperbark Secondary is located in a region that has experienced significant economic challeges due to the closure of local industries. Unemployment in this region is almost three times the state average. Apart from English (spoken at home by approximately 76% of the local population) other home languages include Hazaraghi, Mandarin, Portuguese, Romanian and Arabic.

Over the many years that Naomi has worked in Aboriginal education she has observed that Aboriginal parents want their children to receive a high quality education and the best employment opportunities. However, often due to their own schooling histories, some parents do not have the necessary skills or tools to help their children achieve the level they want for them. Naomi sees it as her job to support Aboriginal students across all aspects of schooling, including curriculum. She is keen to respond to the culture of her community.

Naomi decided to focus her action research on her Year 9 STEM class. She describes this cohort as a challenging group of 23 students (14 males and 7 females) with a range of nationalities and abilities. There are 7 Aboriginal students in the class. Overall, the class is unenthusiastic about STEM and learning, and an analysis of data for the previous semester shows a group of students who had not achieved a passing grade in STEM.

Naomi was particularly concerned that five of the seven students who were not yet on track to pass were Aboriginal students.

Broadly speaking, Naomi’s pedagogical challenge was to engage all students, and particularly Aboriginal students, in her STEM class. Unpacking this challenge further, she asked herself:

Of the several theoretical models of Culturally Responsive Pedagogy evident in the literature, Naomi was particularly interested in those models that made an explicit link to First Nations peoples.

For examle,  the Assembly of Alaska Native Educators’ (1999) Guidelines for preparing culturally responsive teachers for Alaska’s schools details several teacher ‘standards’ that are intended to help Alaskan teachers to develop their culturally responsive practice. These guidelines are equally applicable in the Australian context, and include:

Another First Nations conceptual resource was Walking Together: First Nations, Métis and Inuit Perspectives in Curriculum which,  like the work of Australian  Aboriginal educator Tyson Yunkaporta, made use of symbolism and connection to the land as an integral component of pedagogy.

How will providing students with opportunities to learn through observations, hands-on demonstration and cultural knowledge improve engagement in learning and therefore higher achievement in STEM?

Specifically, how does drawing analogies between past and present technologies improve learning outcomes and development of 21st century skills and capabilities for Year 9 STEM students?

Naomi had been previously involved in the STEM Aboriginal Student Congress and had witnessed the impact when maths was connected to the culture of Indigenous students. Examples of this connection include the algebraic equation behind Australian Aboriginal dot painting and mathematical thinking in Navaho society. At this congress, students seemed to resonate with the idea that culture can cross over into Science, Technology Engineering and Maths concepts. Naomi wanted to nurture a similar connection in her class. In doing so, she also wanted to respond to a community of parents that had high expectations for their children and wanted opportunities for them to pursue jobs in STEM.

Naomi developed a unit of work called  Sending Messages – Now and Then, in which students explored three types of communication:

The unit began with a class discussion on all forms of communication and, later, the importance of symbols as codes in ancient and contemporary societies. Students brainstormed the use of codes, icons and symbols in their lives (e.g. emojis, road signs, language) and took turns writing and interpreting each others messages on the whiteboard. Naomi introduced the concept of the message stick as used by Australian Aboriginal peoples to aid communication between different groups and across distance. Students then designed their own codes and used woodburning tools to inscribe their own message sticks (this included a discussion of the chemistry of combustion and also risk assessment/workplace safety). During this activity, Naomi notes that the students really responded to the mentoring of Ross, one of the ASETOs at Paperbark Secondary.[1]

The unit then moved on to scratch coding which included a lot of student led teaching/learning due to different abilityl evels with the software. Students worked on their own small projects. The final part of the unit turned to robotics, and involved programming ‘Sphero’ robotic spheres.

One student in particular was particularly responsive to this unit of work. This Aboriginal student, who had been diagnosed on the Autism spectrum, had been particularly disengaged  with STEM and did not like being in a big class. He would often skip lessons. However the focus on symbols and communication drew him in and he engaged with the unit from around week 6. He ultimately produced an excellent scratch video at lightning speed.

As a result of her participation in this project, Naomi reports the following professional learning outcomes:

The project intersected with several of Paperbark Secondary’s priorities  including:

Through participating in the CRP project, Naomi was able to look more closely at the role of culture in STEM education, and explored ways to be more culturally responsive in her own pedagogy. She used the models offered by CRP theorists to give her students the best STEM experiences she could in order to increase their confidence and affinity for the subject. She is  looking forward to adapting her pedagogy to further respond to the cultures that her students bring to the classroom.