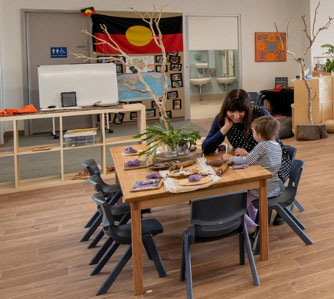 Megan and Lisa are part of the team at Possum Children’s Centre, a metropolitan site in north-west Adelaide. Co-located with a school, the centre is embedded within the local community context to offer a range of activities for young children and their families, including playgroups, kindergarten, occasional care and community programs.

The centre serves a culturally and linguistically diverse community where a language other than English is spoken in more than 35% of homes. These languages include Vietnamese, Greek, Tagalog, Serbian and Malayalam (spoken in Kerala, India). The Aboriginal and/or Torres Strait Islander population in this area is 50% above the state average. Although unemployment is only a little higher than the state average, median household incomes are relatively low, so some families are experiencing economic challenges.

Possum Children’s Centre is quite new, having evolved from a precursor site that operated solely as a kindergarten. The physical design of the new centre is inspired by the Reggio Emilia approach, with a welcoming, free-flowing environment and interconnecting indoor and outdoor learning spaces. Staff view cultural and linguistic diversity as a valued resource and as a core part of the centre’s identity. Of the 2019 enrolments, 23% of children identify as Aboriginal and/or Torres Strait Islander, and approximately 50% speak English as a second language. Staffing includes the Director, two full-time teachers, one full-time and five part-time education care workers, one occasional care officer, and one bilingual support officer. In an initiative of the South Australian Collaborative Childhood Project, the centre was chosen in 2018 as one of four South Australian sites to participate in an exploration of principles from the Reggio Emilia education project through Project Quattro.

Since opening at the new site under a new service model, Possum Children’s Centre has experienced an increase in demand. In 2019, more than 60 children were enrolled in the kindergarten program and they attended in two groups. Playgroups, which cater for very young children from birth to three years, are well-attended—particularly by culturally and linguistically diverse families.

The learning environment at Possum Children’s Centre is influenced by principles from the Reggio Emilia approach, and some staff have studied first-hand the educational practices in Reggio Emilia, Italy. The site is also keen to honour the cultural and linguistic diversity of the children and families that they serve by embedding culturally responsive pedagogies across the site’s planning and practices.

Each year, the staff at Possum Children’s Centre engage in improvement processes to better understand the children and the community that they serve. One of their goals is ‘To improve children’s ability to process and produce complex sentences which describe and express their ideas’. The pedagogical challenge was therefore to improve children’s communication and oral language skills, and the staff identified the need for a more consistent and coherent approach to achieving this goal.

The team at Possum Children’s Centre had recently started using book-based planning as a whole-site strategy to focus on children’s vocabulary and understanding. Educators using book-based planning identify a specific book and develop a series of comprehension, communication and/or vocabularly activities based on that book. The text that had previously been chosen was Mr McGee by New Zealand author and illustrator Pamela Allen. However, with their developing understanding of culturally responsive pedgogy, the team looked at this book through a new lens. In what they describe as a ‘light-bulb moment’, they asked themselves, ‘Does this text connect to our children’s life world’? They further challenged themselves to consider:

How can our book-based planning and teaching processes connect to our children’s life-worlds in order to strengthen vocabulary development and deepen understanding?

A core philosophy at Possum Children’s Centre is that all learning happens with and through relationships. In addition, the following links to CRP and the Reggio Emilia approach align with this philosophy:

What Megan and Lisa did

Working closely with their colleagues, Michelle and Linda reviewed and revised sections of the site’s book-based planning tool. They explicitly incorporated key ideas from Culturally Responsive Pedagogy and the Reggio Emilia approach in order to provide cues for educators as they planned their pedagogical approach with any focus book:

They also ensured that the life-worlds of children and their families were given explicit consideration at each stage of a ‘define-do-revise’ pedagogical cycle for new vocabulary:

Working with this revised tool, and realising the shortcomings of the previously chosen book Mr McGee, the team selected a new text for the action research. A range of possibilities were carefully considered. Due to its relevance to the Australian context, they chose Summer Rain by non-Indigenous Australian author Ros Moriarty, illustrated by Indigenous design agency Balarinji, The lyrical text of Summer Rain opened up possibilities to strengthen children’s vocabulary development. The text and illustrations focused on animals, providing opportunities to connect to children’s own life experiences through sharing their stories about animals.

In consultation with the team, Megan and Lisa selected five children as the focus for their action research. The children were from a mixed-age kindergarten group, which also provided an opportunity to look at the construction of knowledge in multi-age groups. The families of these five children were intentionally included in the planning and learning. A letter was sent home informing parents that their child had been selected to participate in a research project, and explaining the basics of culturally responsive pedagogy and introducing the focus book Summer Rain. They invited families to share any prior connections to specific words from the book, including translations in their home language. The target words were:

Land:          Land is our home, it is our connection to the earth and our people. Jewel has special connections to different parts of Australia. She is also very connected to the land and picks up on places we shouldn’t be, including spiritual places.

Dancing:     Connor loves to express himself through dancing.

Sage loves to dance all over the house.

On site, educators set up a ‘story table’ so that the five focus children, and indeed all of the children and educators, could engage with Summer Rain in their play. 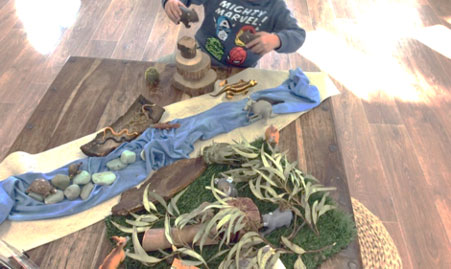 Each day, one page of the book was explored by the children and educators in small groups During these indoor or outdoor sessions, children expressed their developing understandings of the target vocabulary either orally or through other languages, such as movement. There were also shrugs of ‘not sure’ as new words arose. Educators were careful to listen to children’s understandings first, before defining new words.

The staff collected photos, videos and sounds of the five protagonists as they experimented with their growing understandings of the vocabulary and text. Videos and photos were projected on a big screen for all the kindergarten children to see, much to the delight of the protagonists. This public performance of learning inspired the construction of a new locally contextualised version of Summer Rain with input from many of the children, to complement the published text. As one of the children from the broader group exclaimed, ‘I need to be in this book!’ The site’s version of the book evolved as more children wanted to be a part of it, and the completed work was shared with all children and families at an end-of-term celebration.

Michelle and Linda noticed changes in the focus children as they gained confidence and pride through this book-based learning project. An Aboriginal girl who was often reluctant to talk with other children became more willing to speak out in a group situation. Her visible delight when she saw herself on the big screen was significant for her wellbeing. A Māori boy was thrilled to be able to show his grandmother, who was visiting from New Zealand, that he was part of a group activity. And an Aboriginal family, who had not been regular attenders the previous term, enjoyed receiving documentation of their children’s ongoing engagement with the learning.

As the project spread to the wider group of kindergarten children, staff began to notice the vocabulary and/or associated movements used spontaneously in play as children transferred the words to new contexts. For example, a group of children building a robot could be heard saying, ‘The robot is crawling, the robot is creeping’. The educators observed that the children often bypassed conversation about the meanings of words, and instead experimented with their understandings through the language of movement. On reflection, this highlighted that movement is the child’s first language. Children acted out ‘Geckos stretch as sunset comes’ on the play equipment. Text such as ‘turtles crawl’, ‘lizards creep’ prompted children to crawl and creep, sharing their knowledge with other children who joined in or adapted their thinking. 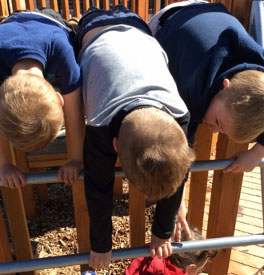 Each of the protagonists was given a copy of the final text to take home, and staff heard many stories of siblings and extended family members enjoying the story. For example, in a Māori family with four children, the eldest daughter read the text to the whole family. Such sharing increased the opportunities for children to revise the focus words and to transfer them into other contexts at home and in their community.

As a result of this project, Michelle and Linda, backed by their colleagues at Possum Children’s Centre, have re-imagined some of the routine processes and pedagogical practices in use at the site.

While Michelle and Linda acknowledge that they found the action research challenging at times, they believe that the learning was invaluable, and they intend to integrate research into the site’s routine practices. They will continue to question whose culture is operating and to reflect on their learning environment, their resources, and educators as participants in the learning process.