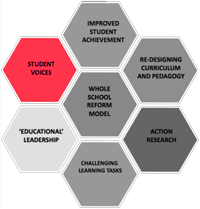 Improving student achievement in mainstream classrooms could be enhanced if the initiative incorporated a strong version of ‘student voice’, especially in the curriculum projects.

Historically, students have been denied the right of speaking and being represented at school (Johnston & Nicolls, 1995). Educators, including policy makers, administrators and teachers, have tended to neglect the ways students make sense of their schooling, and unfortunately young people generally have very little involvement in co-constructing what goes on in their classrooms or in their schools.Try mapping student voice at your school/site using the template Mapping student voice as a prompt for your mapping. Please add your own text to the handout.

Promoting student voice in schools involves working out how to provide students with the spaces and the practices which enable their perspectives and their ways of making sense of their lives into the curriculum making processes of the school. This ‘problem’ of student voice has a large archive in educational literature and some of these include the following:

For Boomer, (Boomer, Lester et al., 1992) negotiating is implicit in the work of teaching. But how to make the process of negotiating explicit and curriculum focused? Boomer invoked the metaphor of composing the curriculum—the curriculum being ‘a jointly enacted composition’ (p. 32)—which he argues provides a frame for thinking past the idea of curriculum as pre-packaged, involving ‘lock-step teaching sequences’ (p. 5) experienced as ‘an almost self-perpetuating chain of subjections’ (p. 5). When taken seriously by teachers, students are given ‘opportunities to make connections between their linguistic, cultural, world knowledge and experience, and the topics, skills and competencies of the official curriculum. For an example, of negotiating the curriculum see Hyde’s (1992) Sharing Power in the Classroom.

In a similar vein, the ‘productive pedagogies’ approach adopted by the Queensland Department of Education, Training, and the Arts (2006) proposes that ‘students engage with real, practical or hypothetical problems which connect to the world beyond the classroom, which are not restricted by subject boundaries and which are linked to their prior knowledge’ and ‘has value and meaning beyond the instructional context, making a connection to the larger social context within which students live’. The ‘multiliteracies’ project (New London Group, 1996) argues for ‘situated practice’, or that part of curriculum that aims to ‘recruit learners’ previous and current experiences, as well as their extra-school communities and discourses, as an integral part of the learning experience’ (p. 85). The idea of situated practice is defined succinctly as: ‘Immersion in experience and the utilization of available discourses, including those from the students’ lifeworlds and simulations of the relationships to be found in workplaces and public spaces’ (p. 88).