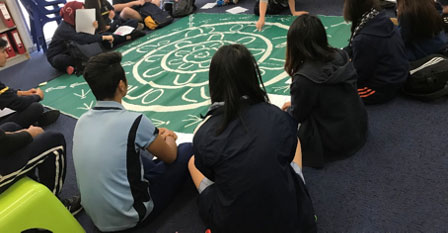 Simone had been teaching at Sheoak Secondary for seven years when she joined the Culturally Responsive Pedagogy project. In previous roles in the school she had tutored Aboriginal students and then accepted a position as an Aborignal Education Teacher. She is currently the school’s Aboriginal Education Co-ordinator.

Sheoak Secondary has an enrolment of over 800 students, of which more than 40 percent are eligible for financial assistance through the South Australian government’s school card scheme. Almost 80 students are of Aboriginal and/or Torres Strait Islander heritage. Students with disability account for around 150 enrolments, and approximately 170 students speak English as another language.

Sheoak Secondary serves a culturally diverse community located approximately 25 km to the north of Adelaide. The population of Aboriginal and Torres Strait Islander peoples in this community is lower than the state average. More than 30 percent of people speak a language other than English in the home, with the most common of these languages being Nepali, Italian, Vietnamese, Hazaraghi (spoken in Afghanistan) and Khmer. Unemployment in the region is double the state average.

Simone originally planned to focus her action research on her Year 9 English class. However, a change in class allocations meant that she needed to quickly revise her plans to focus on her Year 11 Research Project class. This cohort of 21 students was new to her. Along with students of Anglo-European origin, there were 13 EALD[1] students from a range of countries including Afgjanistan, Bhutan, Burma, Guinea and Tanzania.

Under the South Australian Curriculum Authority, the Research Project is a compulsory subject in Year 11. Working individually, students investigate a question of interest to them in order to develop their skills in planning, research, synthesis, evaluation and project management. Although the teacher does conduct some whole-class learning activities, their role is primarily one of facilitator of independent learning, helping students to refine their research questions and supporting them to develop the necessary research skills, such as interviewing and text analysis. Initially, Simone was not sure how to develop a culturally responsive approach to this particular subject, yet the outcome of her action research surprised her.

[1] EALD = English as Another Language or Dialect

During the first three weeks with this class, Simone noticed that the students interacted in clusters along socio-cultural lines: African boys, EALD students, two ‘high IQ’ students, a group of three ‘mainstream’ students, and two students who characteristically sat alone. There was very little interaction between these clusters. Many of the students were reluctant to speak in front of their peers or share their ideas.

Also, Simone wanted to raise awareness of Australian Aboriginal issues, especially given that many of her EALD students were relatively recent arrivals to Australia.

The framework that Simone drew on was the Kaupapa Māori Culturally Responsive Pedagogy of Relations (Bishop et al. 2007). As the name indicates, this model of CRP explicitly foregrounds relationships as foundational for culturally responsive classrooms. Simone focussed on three Kaupapa Māori principles:

The research question that Simone posed had two components:

How does increasing student voice make a difference to increasing participation and engagement?

Does the use of a yarning circle and Aboriginal cultural content increase student voice, participation, learning and listening skills?

Simone decided to introduce the concept of a Yarning Circle to her class. A Yarning Cicle is a communication strategy used by some Australian Aboriginal peoples. Globally, similar strategies are used among many other First Nations peoples. Yarning Circles have been increasingly used in Australian schools and other settings to promote the development of trusting, respectful relationships.[1] In order to do so, she sought the guidance of Anita, one of the school’s ASETOs. Not only was Anita willing to share her knowledge and to assist Simone in the classroom, she also consulted with her father, who is a respected Aboriginal Elder. Simone was therefore learning about the conduct of a Yarning Circle from appropriate cultural knowledge-holders.

In the Research Project class, the Yarning Circle was used for group discussion. All participants sit in a circle on the ground. This positions everyone on the same ‘level’ and helps to reduce power imbalances—in this case between students, and between students and the teacher. Simone also moved out of the classroom to other more ‘neutral’ spaces (such as the Nunga Room and the Wellbeing Room). Simone wanted to create a safe environment where students could share their points of view.

Other changes that Simone made inluded:

[1] For some educationa l examples, see NSW Schools Reconciliation Challenge  and Queensland Curriculum and Assessment Authority. A dedicated Yarning Circle ‘mat’ for participants to sit on can be used, but is not essential.

[2] In one contemporary model of organisational thinking and behaviour:

Above the line = Ownership, accountability, responsibility

Below the line = Blame, excuses denial

Once a week in Simone’s class, students move a photo of themselves and their teacher either above or below a line to visually represent their current perspective.

At first students were apprehensive and reserved because the Yarning Circle was new to them. However, they began to learn to actively listen to each other. Relationships started to be built. Simone’s journal entries record some significant changes in individual students, for example:

However, it was only when Simone reviewed photos taken during the Yarning Circles and in the classroom that she realised that there were also significant changes in the micro-politics of the whole class. The photographic data showed that student groups had shifted, there was a change in typical seating positions, and different cultures began to interact with each other. She noticed that students were responding to one another in Yarning Circle discussions and finding their ‘voice’. The change in environment raised student engagement and the students looked forward to their Yarning Circle sessions.

This new behaviour also carried across to more typical lessons. Students began supporting each other with their projects and became learning resources for each other rather than always relying on Simone for guidance. They were now willing to share their work and provide non-judgmental feedback. And by discussing aspects of their individual projects, there was an increase in cultural awareness and world knowledge. For example, one student told the class about the struggles of the Rohingya peoples. Not only did Simone observe that student engagement increased, students’ own perceptions of their engagement also increased, as evidenced in class survey responses.

Simone reports the following outcomes in relation to her understanding of her pedagogy and classroom dynamics:

The changes that Simone made align with the following elements of Sheoak Secondary’s site strategy:

It is significant that Simone consulted with appropriate Aboriginal knowledge-holders before introducing the Yarning Circle to her class. Anita, an ASETO at the school, was able to draw on her own cultural experiences and those of her father, an Aboriginal Elder, to guide Simone in conducting the Yarning Circle. The collaboration between Simone and Anita strengthened their professional relationship, and placed Anita in the role of educator of both Simone and her students. This was a significant extension of Anita’s usual role of ‘crisis management’ whenever there was a perceived issue with an Aboriginal student or family.

In the future, Simone plans to make group work an essential element in her teaching of Research Project in order to encourage student voice but also to promote sharing of knowledge and ideas. She also wants to broaden her connections with parents, so that she is better able to make links between students’ home and school lives and thus continue to build a Culturally Responsive Pedagogy of Relations.