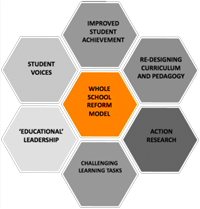 Teachers’ work and student learning occur in actually existing schools. In which case any sustainable reforms that might be made to classroom practice to improve student achievement are negotiated at the school level. No matter whose reform ideas are to ‘implemented’, all reforms are enacted in the realities of life in schools. Each school has its own unique ‘scheme of interpretation’ (Garfinkel, 1967, p. 36) through which classroom life can and is made recognizable and intelligible. Or put simply, all schools sustain their own rationality or logics, that informs local classroom practices. Classroom practices and specifically pedagogies arise in response to locally diagnosed problems that emerge out of the practical reasoning at the local school level. Those working in schools use the resources available within the school to solve their own problems. Pedagogy then, develops in response to the question: what does [my] pedagogy have to do? Such a question focuses our attention on what pedagogy has to do in specific ‘local’ contexts, and in response to existential problems such as, with this group of students, working with these classroom resources (such as technology and or available texts) which means responding practically to the needs of complex school communities.

There are many versions of theories of whole school change. Of note is Tyack and Tobin’s (1994) grammar of schooling’ which was developed in order to understand why schools have been so ‘hard to change’. An alternative approach is advanced by Smyth and Hattam (with others) (Smyth & Hattam, 2002; Smyth et al, 2003). Their approach, following the National Schools Network (Harradine, 1996) proposes a school cartography:

involving three inter-related moments or aspects: re-structuring, which includes changes at the organisational level to such things as the use of time and space, groupings of staff and stu 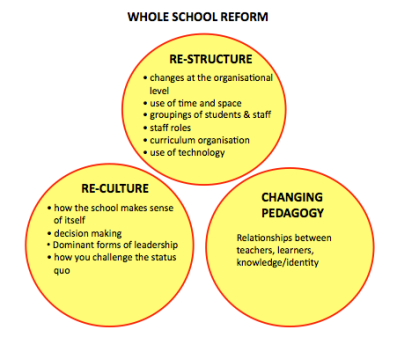 Another alternative was developed during the Disadvantaged Schools program in the 1980s and 1980s that still has some currency (Thomson, . In brief, whole school reform involves a coherence across school vision, curriculum and pedagogical change and professional development.