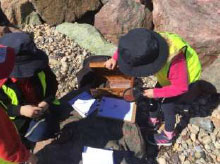 With an extensive career in early and primary years education and leadership behind her, Angela currently works as an early childhood educator at Wombat Preschool Centre. Angela has worked at this site for five years, and feels supported by a collegial and collaborative team.

Wombat Preschool Centre serves a rural community located about two hours from metropolitan Adelaide. The preschool caters for 36 children aged between 3 to 6 years. Many of the families using the service are facing complex socio-economic issues which include lack of employment and housing opportunities, and residential transience. Children attend the centre on a fortnightly roster, two full days one week and three full days the next. Attendence is above the state average.

Wombat Preschool Centre is located on the traditional lands of the Narungga Nation. In 2018, State Government signed the Buthera Agreement (Government of South Australia 2018) which commits  state departments to supporting Narungga social, educational and economic engagement.

Angela collaborated with her colleagues to identify a current pedagogical challenge: To deepen children’s understanding of and connection with their local surroundings as they recall and share their prior knowledge of Narungga land and familiar community landmarks.

In doing so, Angela and her colleagues endeavored to:

How does our Beach Kindy learning enhance children’s curiosity, communication and collaboration?

What Angela did differently

Angela made several deliberate adjustments to her pedagogy in order to children’s curiosity, communication and collaboration:

Angela also created opportunities for small and large group discussion with the children. On arrival at the beach, children discussed as a group and also individually expressed how they were feeling in order to gain some insight into their thinking and decision-making at the beach on that day. Once back at the preschool centre , the children were gathered into small or large groups to recall and share their discoveries and learning, and to discuss any items they had found to add to a communal ’treasure box’. Discussions and conversations were recorded and later critically analysed by the teaching team. Critical analysis provided opportunities for multiple perspectives to inform further planning of intentional teaching moments and for Angela to obtain feedback on her engagement in a pedagogy of listening and co-constructive practices with children. The team also considered and evaluated other factors that impacted on the learning (e.g. weather conditions, energy levels of children, familiarity with the routine, or new children to the centre).

Outcomes for the children and their families

Outcomes for Angels and her colleagues

Angela’s prticipation in the project enabled her and her colleagues to validate and reinforce their practice in a number of areas:

And reflecting on action research:

As a consequence ofher participation in this project, Angela and her colleagues  at Wombat Preschool Centre intend to: